Recognized for their eclectic repertoire of music, The Annex Quartet—Stanislav Pronin, Carolyn Blackwell (violins), Yunior Lopez (viola), and Peter Cosbey (cello)—continues to deliver dynamic performances that push the boundaries of classical music. Founded in 2008 at The Royal Conservatory and based out of Toronto, Canada, the quartet has been in high demand throughout Canada and abroad appearing in over 100 concerts including acclaimed performances at Zankel and Weill Recital Hall’s at Carnegie Hall, the Montreal Museum of Modern Art, and the Stratford Festival to name a few.

Whether performing Mozart, Crumb, or even some Mississippi blues, The Annex Quartet has the capacity to capture an audiences’ attention with style and finesse. They revolutionize performances both visually and acoustically and take the audience back in time and to the future, often all in the course of one evening. It’s mission: to give the current generations insight into a specific time in history, through updated takes of music, both through performance and recordings.

In the summer of 2012, the quartet created The Roaring Twenties project: an initiative to revive the sounds of the 1920’s through newly arranged works for string quartet and singer. Collaborating with producer Roberto Occhipinti, arrangers Hilario Duran and Andrew Downing, and singer Sarah Jane Pelzer, The Roaring Twenties went on to become the groups much-anticipated début album and highly praised performance project. Unlike any other string quartet album, The Roaring Twenties is a testament to The Annex Quartet’s body of work and vision. Musically, the album is of the most diverse, mixing genres like danzon, tango, dixieland, and broadway by artists such as Jelly Roll Morton, Sydney Bechet, Fred Fisher, Ernesto Lecuona, and Kurt Weill. In 2014, The Annex Quartet collaborated on Jane Bunnett’s Maqueque album, ultimately winning the 2015 JUNO Award for Jazz Record of the Year. Most recently, the Annex Quartet released their Latinoamericana album (2018). The recording features popular & forgotten works from Latin America with unique arrangements from Mexican composer Arturo Hernandez and Cuban pianist Hilario Duran.

Gradually, the quartet has expanded their repertoire by experimenting with various styles of music. Recently, they embarked on a piano blues project based on the music of Eurreal “Little Brother” Montgomery- an American blues pianist with a unique style that has long been forgotten. Furthermore, they ventured into the Kronos Quartet’s repertoire list studying the works of Terry Riley, Franghiz Ali-Zadeh, Osvaldo Golijov, Astor Piazzolla, Tan-Dun, and others under the guidance and mentorship of Kronos and pipa virtuoso Wu Man. Past projects include unique interpretations and staging on George Crumb’s Black Angels and Joseph Haydn’s The Seven Last Words of Christ. Moreover, The Annex Quartet owns percussive instruments from Cuba, the Middle East, and Asia used throughout their eclectic repertoire.

Essential to Annex’s development is their collaborations with artists and composers. Since 2009, the quartet has premièred, presented and/or recorded the music of Murray Schafer, Andrew Downing, Colin Power, David Lidov, David Occhipinti, Hilario Duran, Larysa Kuzmenko, Patrick Reid, and William Westcott. Likewise, they have shared the stage with a variety of artists like Jan Lisiecki, Peter Longworth, Hilario Duran, Samuel Deason, Mikel Rouse, Sarah Jane Pelzer, and the Kronos Quartet. In 2013, the quartet collaborated with film director Atom Egoyan during his latest movie production entitled The Captive. Released in August 2014, the film features The Annex Quartet in a performance scene playing the string quartets of W.A. Mozart.

Appearing regularly throughout Toronto’s many bars, coffee shops, and concert halls, The Annex Quartet has its roots in classical music. The quartet managed their very own concert series in Downtown Toronto from 2009-2011 giving monthly performances of string quartets by L.V. Beethoven, Joseph Haydn, Leoš Janáček, Felix Mendelssohn, W.A. Mozart, and Dmitri Shostakovich. In the same manner, Annex presented the piano quintets of Johannes Brahms, Antonín Dvořák, and Dmitri Shostakovich to well received audiences. In 2011, The Annex Quartet was invited to make their Stratford Summer Music début performing the six Mozart-Haydn quartets in a three day period. Since then, the group has appeared at the festival in over half a dozen performances, which led to being named the resident string quartet of the Stratford Summer Music Festival. Past appearances include the Luminato Festival, the Richard Bradshaw Amphitheatre, Alliance Francaise de Toronto, Koerner Hall, Toronto’s Botanical Garden’s Outdoor Series, and special fundraising events for the Ottawa Chamber Fest and the Toronto Summer Music Festival. Upcoming appearances for 2015/2016 include 3 days of performances with pianist Jan Lisiecki at Stratford Summer Music, the Music Toronto Series at the St. Lawrence Centre, and their return to the USA with their debut in Las Vegas, NV.

Annex’s body of work has become the threshold for their vision of music in the twenty-first century. Plaid Magazine described them as a group “trying to spread their sound as far as it will travel through explorations of relatable and relevant topics.” The Annex Quartet has been the ensemble-in-residence at the Stratford Summer Music Festival and the Midtown Music School in Toronto, Canada. Their music is available on all digital platforms. 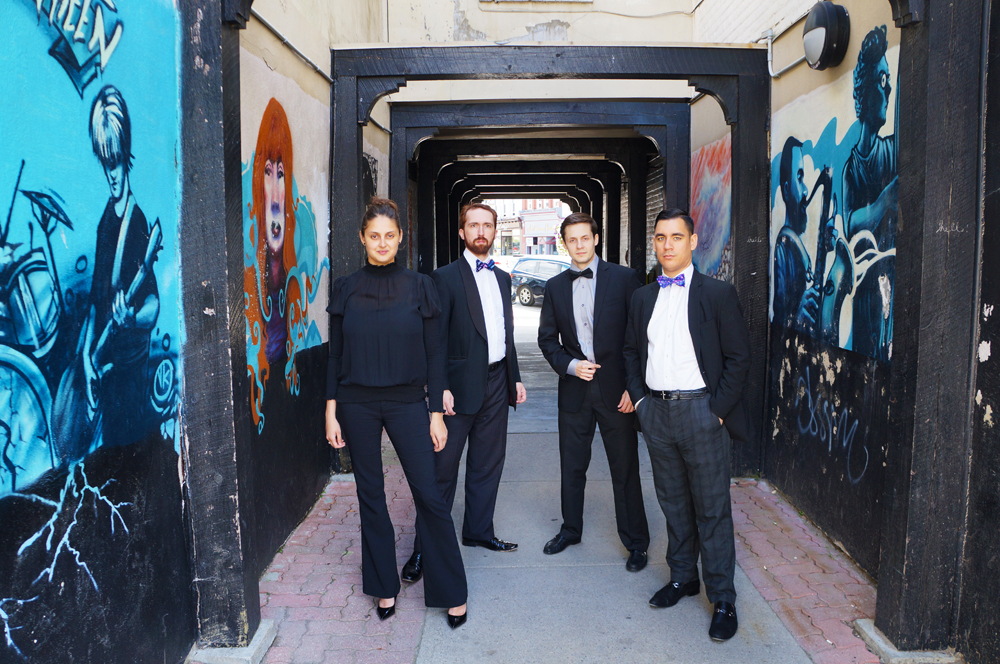